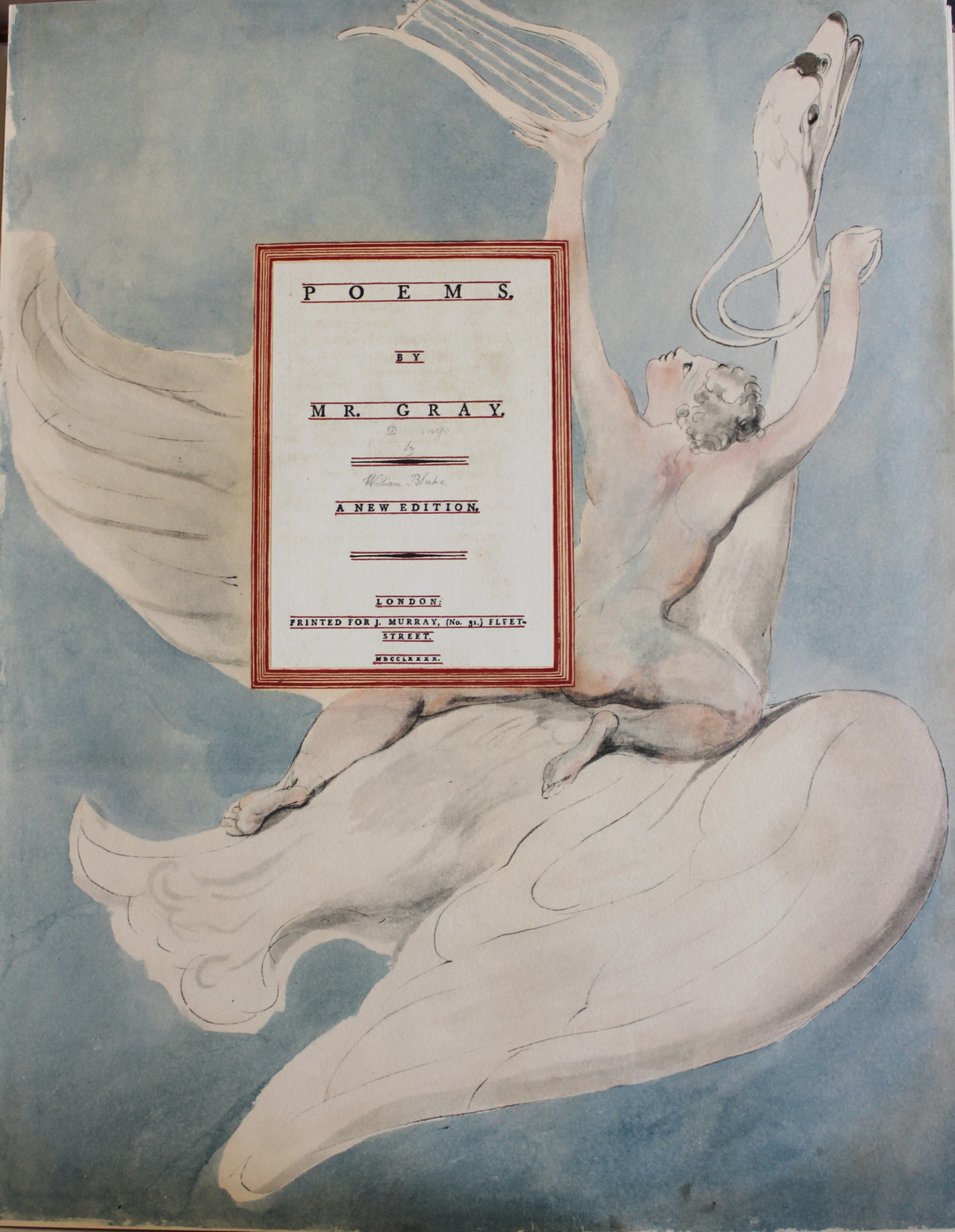 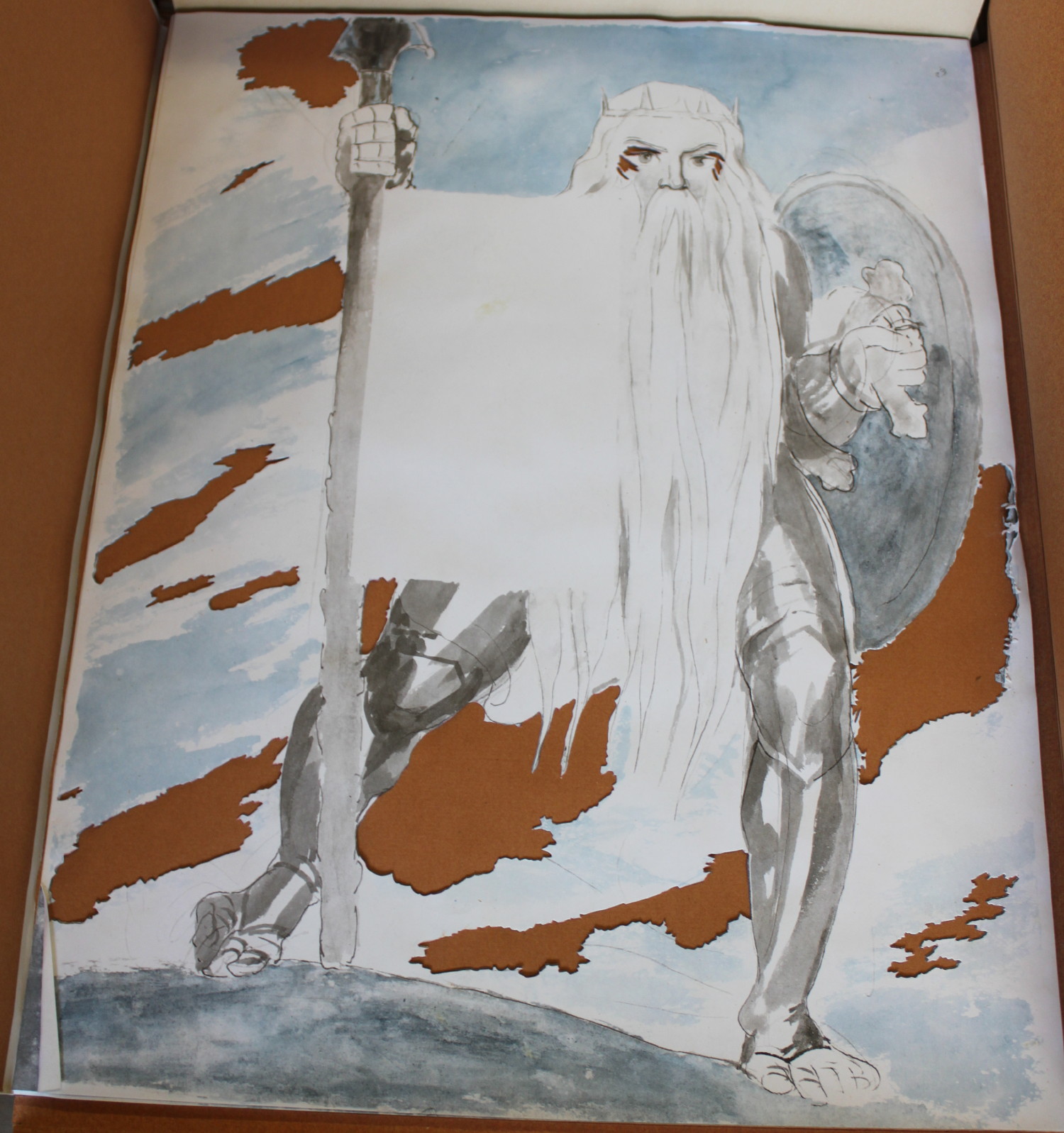 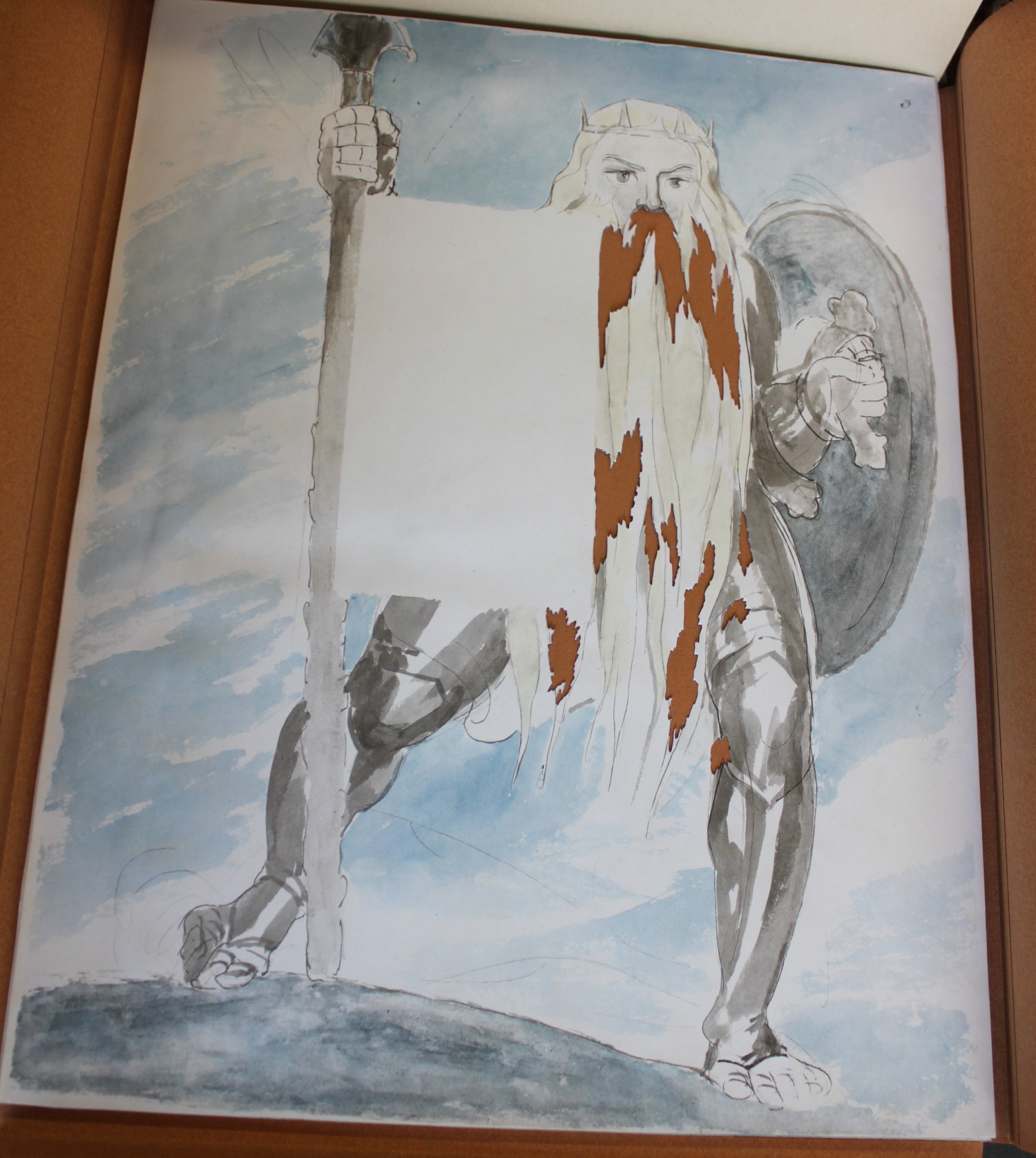 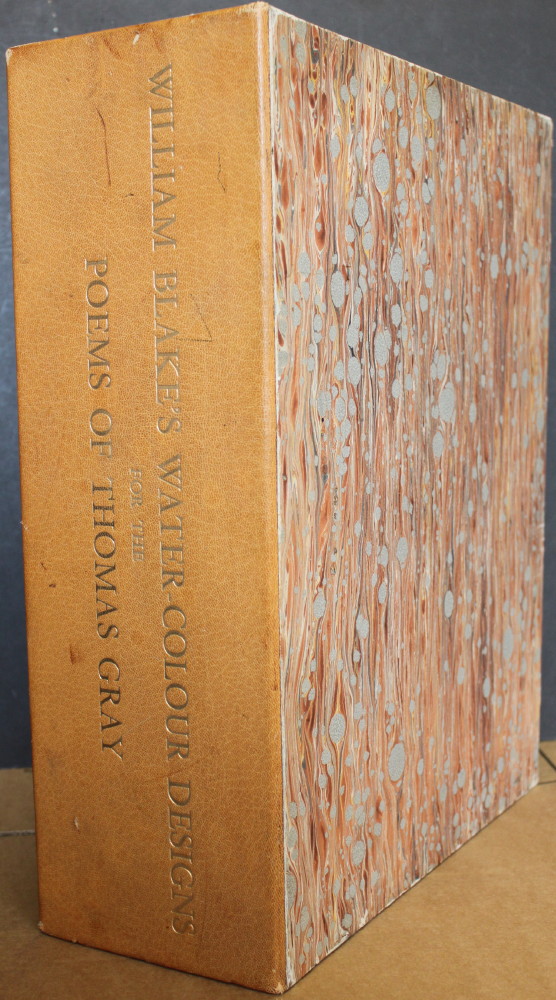 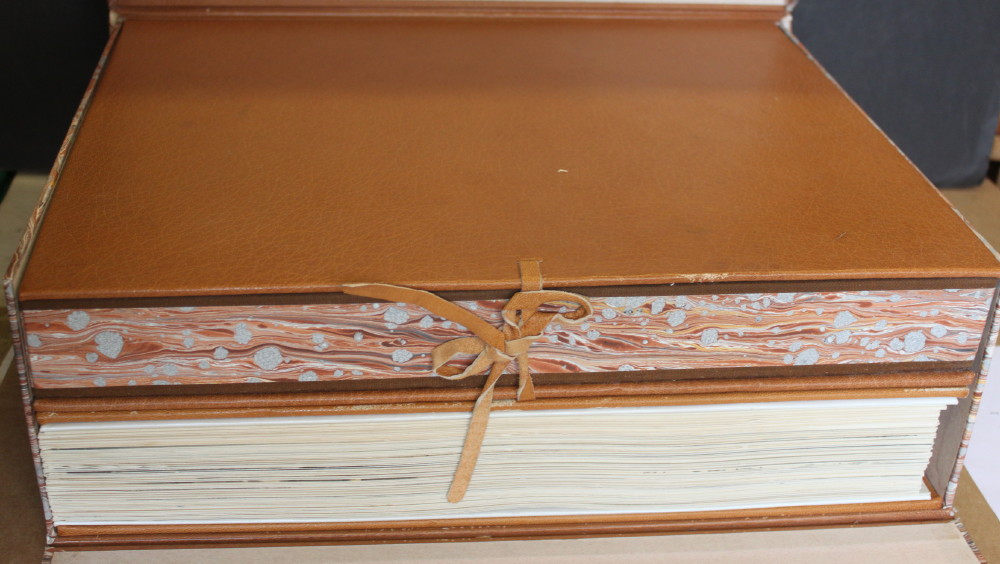 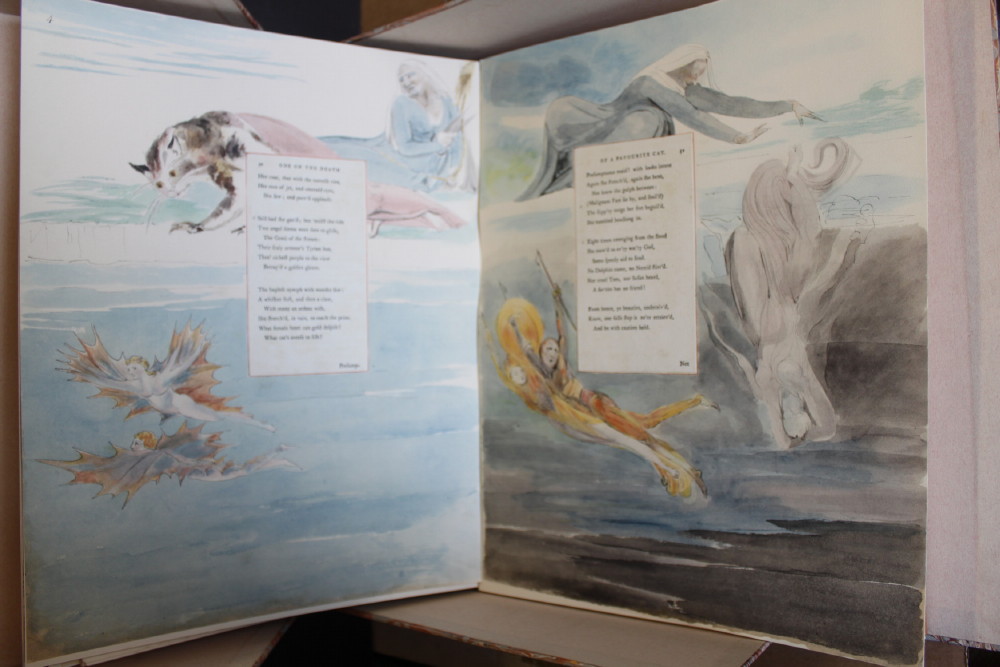 Number 12 of 36 special copies with extra material. Folio. 2 volumes in slipcase. Frequently described as the Trianon Press masterpiece, this is undoubtedly a magnificent work contending for the title of one of the greatest pieces of 20th century printing. The edition was limited to 518 copies, printed on specially made Arches pure rag paper made to match the paper used by Blake. 12 copies numbered I to XII, in three volumes, full morocco, with an additional portfolio containing a series of progressives showing the stages in the hand-stencil colouring of a single plate, together with original guide-sheets and stencils and other material used in the making of the facsimile, presented in a matching box. 36 copies numbered 1 to 36, unbound in the French style, in a full morocco portfolio, with an additional portfolio containing technical material as in copies I to XII, in a matching box. 352 copies numbered 37 to 388, in three volumes bound in quarter morocco, or unbound in the French style in a quarter morocco portfolio, presented in a matching box. 100 copies numbered 389 to 488 are reserved for Mr. Paul Mellon. 18 copies numbered A to R are hors commerce. This copy is Number 9 of the 36 special copies. The watercolour designs were reproduced by the collotype and hand-stencil process in the workshops of Trianon Press (France) in Paris. The text of Gray's poems was printed on pure rag laid paper from copperplates, using three additional printings to reproduce Blake's pencil crosses and to obtain the tone of the paper. The illustrations were commissioned by Blake's friend John Flaxman in around 1796. On the death of his wife, they passed by sale to William Beckford of Fonthill Abbey, then by descent through Beckford's daughter to the Duke of Hamilton, finally by sale to Paul Mellon. Although known of, and occasionally viewed by a select few, during the whole of this period it was never shown in any exhibition of Blake's works. Due to the generosity of Paul Mellon who entrusted them for a period of 4 years to Arnold Fawcus of the Trianon Press, this is the first time they have been reproduced. Fawcus and the Trianon Press set themselves exceedingly high standards of production, aiming for complete accuracy of Blake's designs, and several times had to abandon a plate when it failed to meet their critical eye. Comprising: 1. Watercolour designs for the poems of Thomas Gray. 116 full page printed designs hand coloured using the stencil process, printed on one side only, the separately printed text laid on. Together with a note from the printer, introduction and commentary by Geoffrey Keyes. This section unbound in the French style, with a full morocco case. The early pages have some light foxing, and the case is a little scuffed. 2. Technical material. A. The Fatal Sisters [Plate 3], the complete series of 32 collotype and hand coloured progressive states. B. The 12 hand-cut guide-sheets and stencils for plate 3. C. The three collotype negatives for plate 3 corrected by hand. D. A selection of 20 finished colour plates 'for framing'. E. A made up sheet with one of the copper plates used for Gray's text together with the three printing states. F. 'Ode on the Spring', & 'Ode to Adversity'; the complete series before hand-colouring and other early proof plates. Each section enclosed in a paper portfolio; the whole contained in a full morocco drop down box. Both sections held within a morocco backed solander with marbled sides, some light spotting to the preliminaries, the base of the box showing shelf wear and one of the short outer joints split.

Title: Watercolour Designs for the Poems of Thomas Gray.

Publisher: The Trianon Press for the William Blake Trust, 1972.: