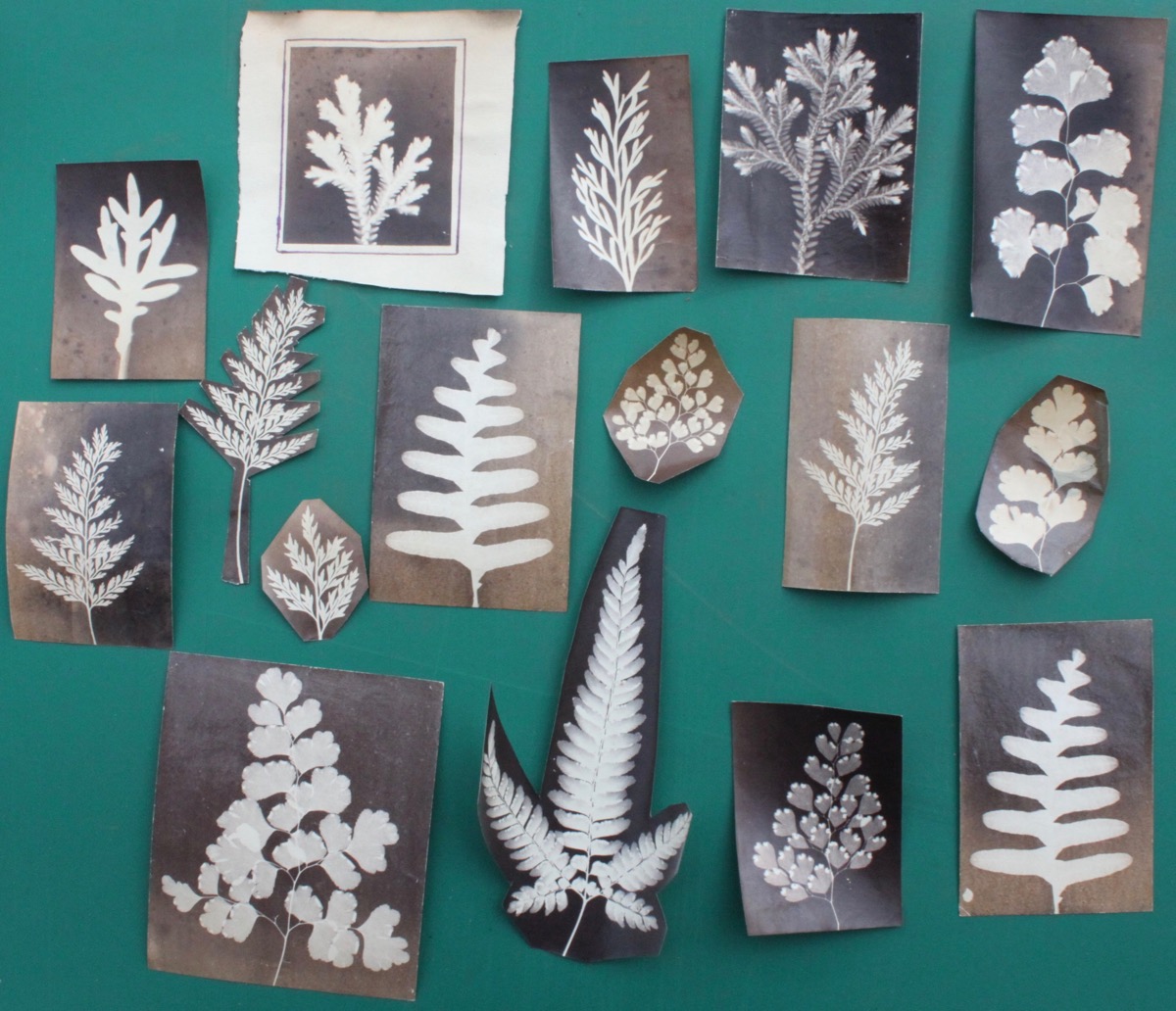 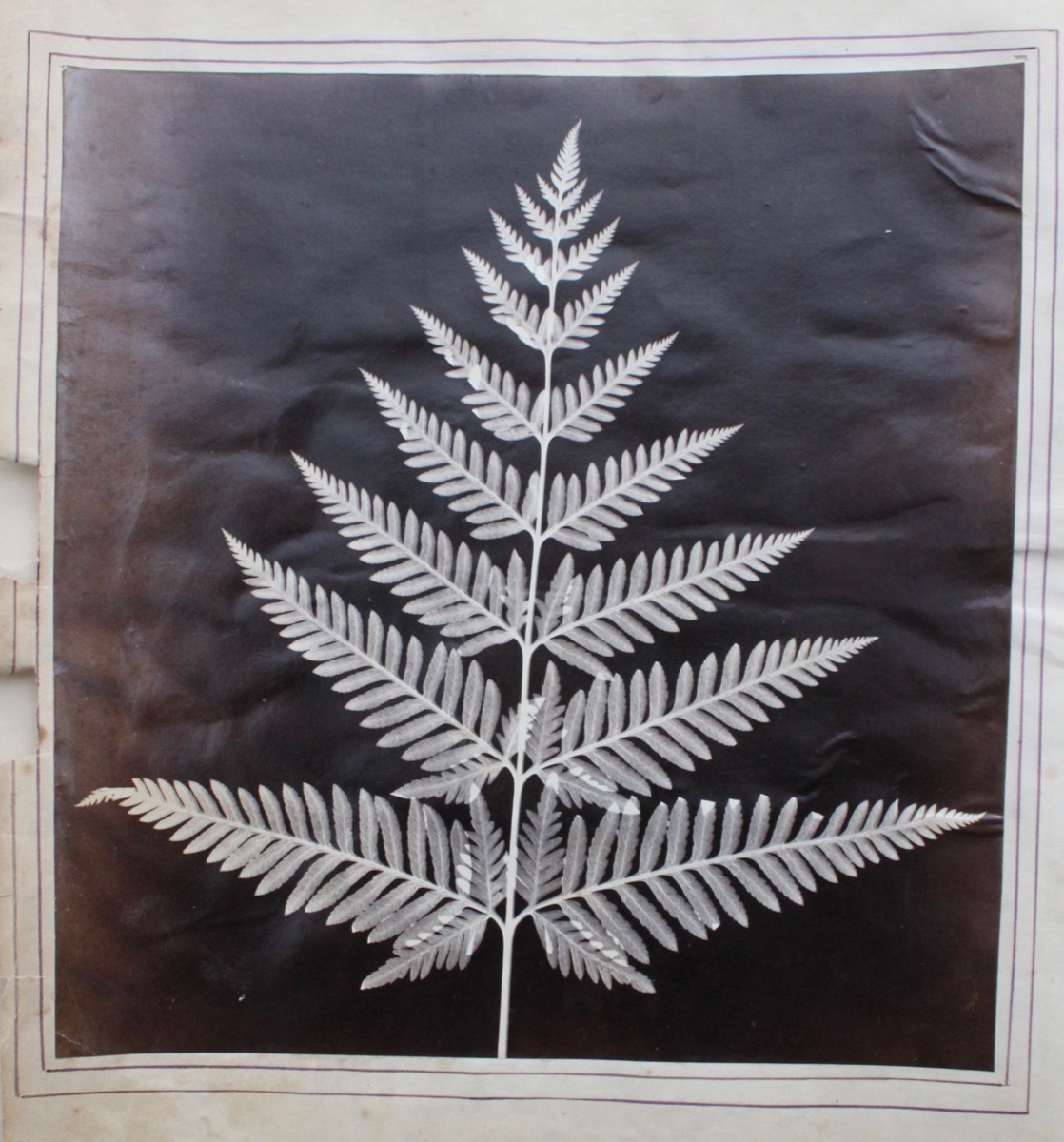 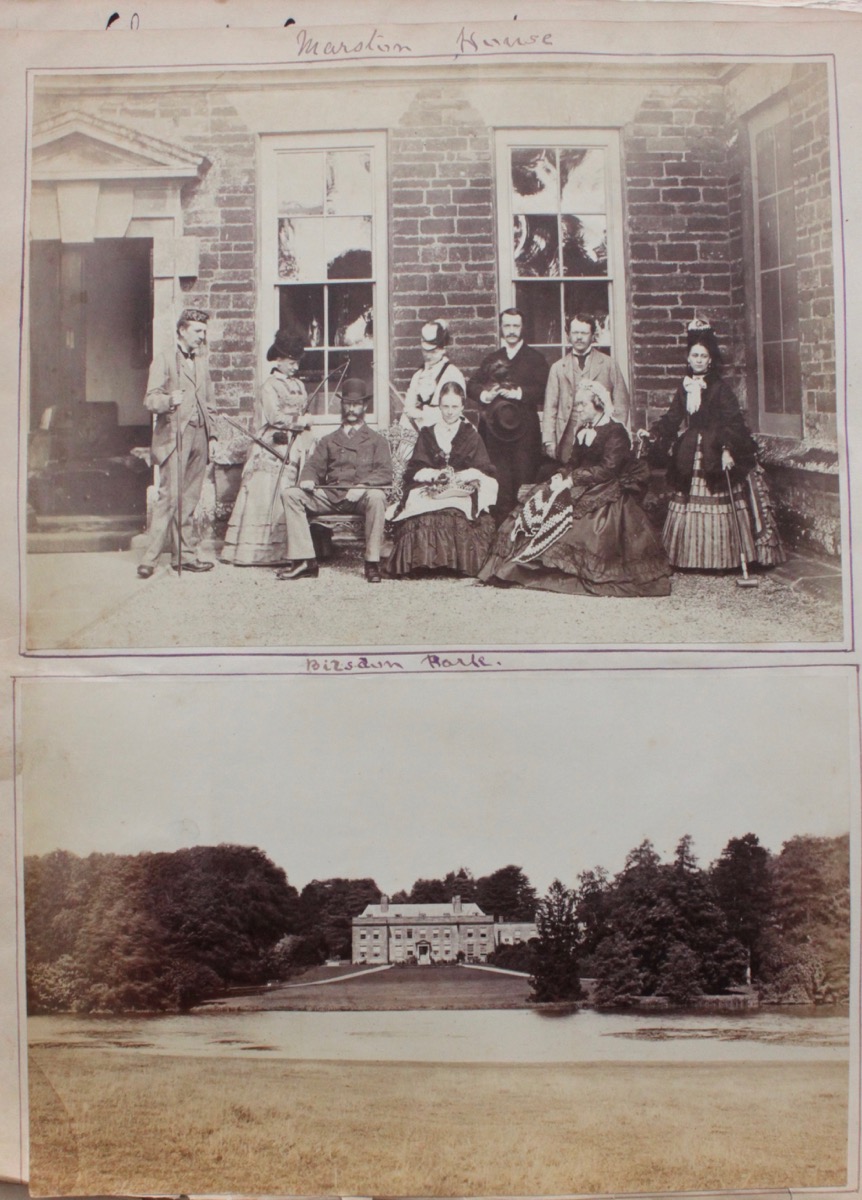 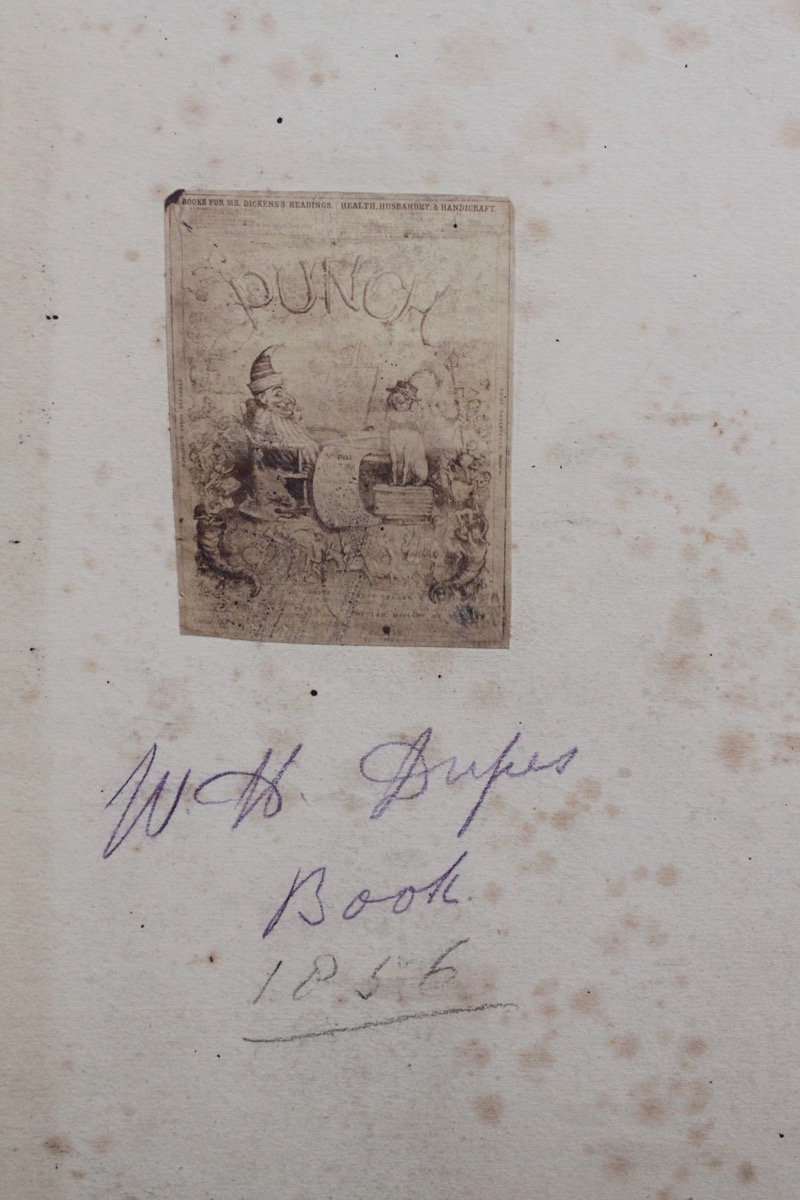 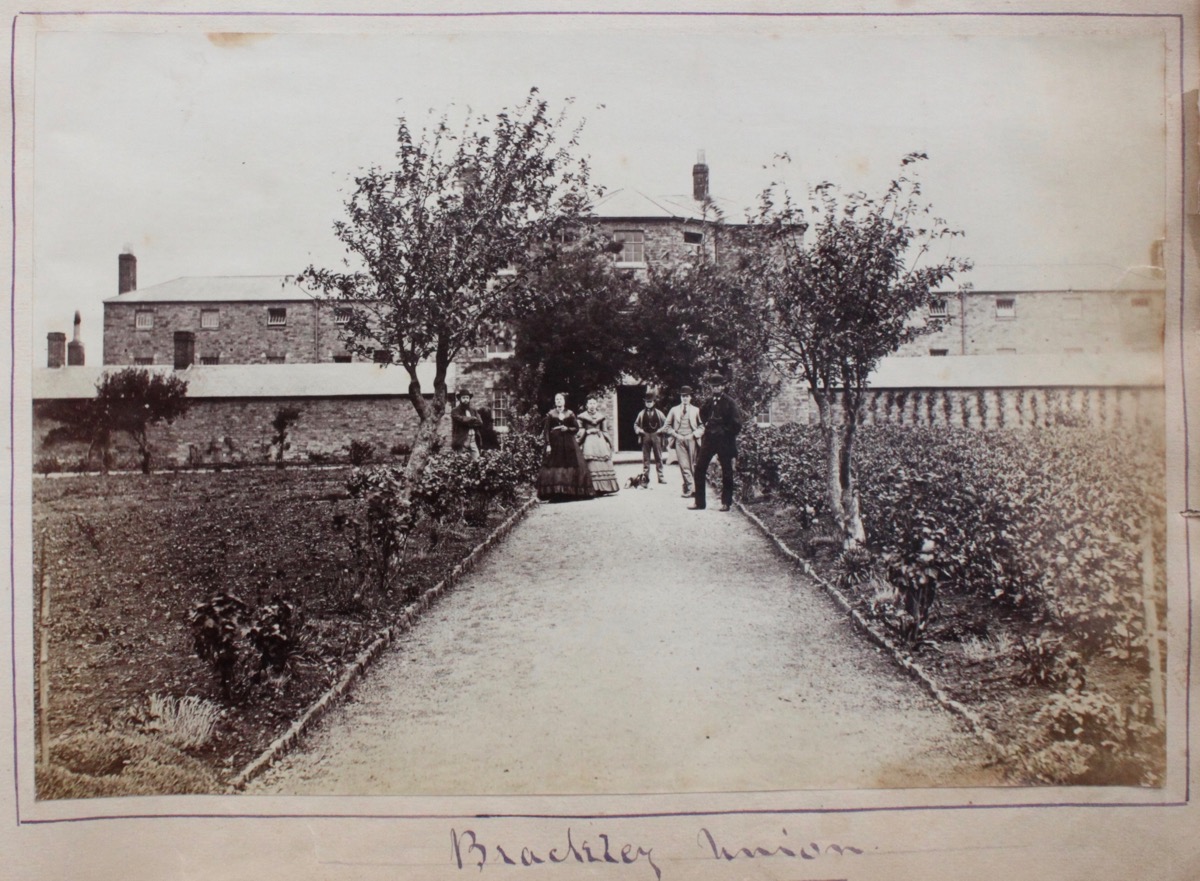 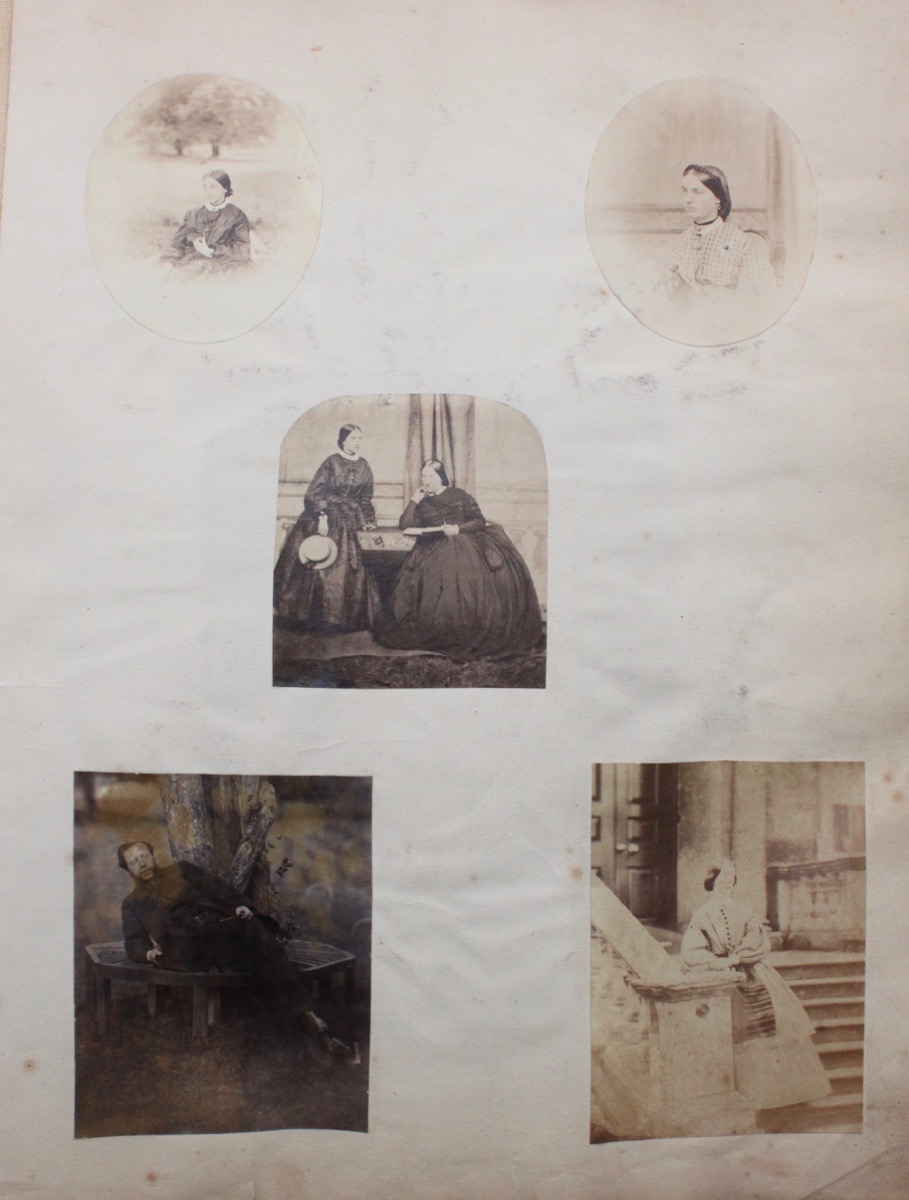 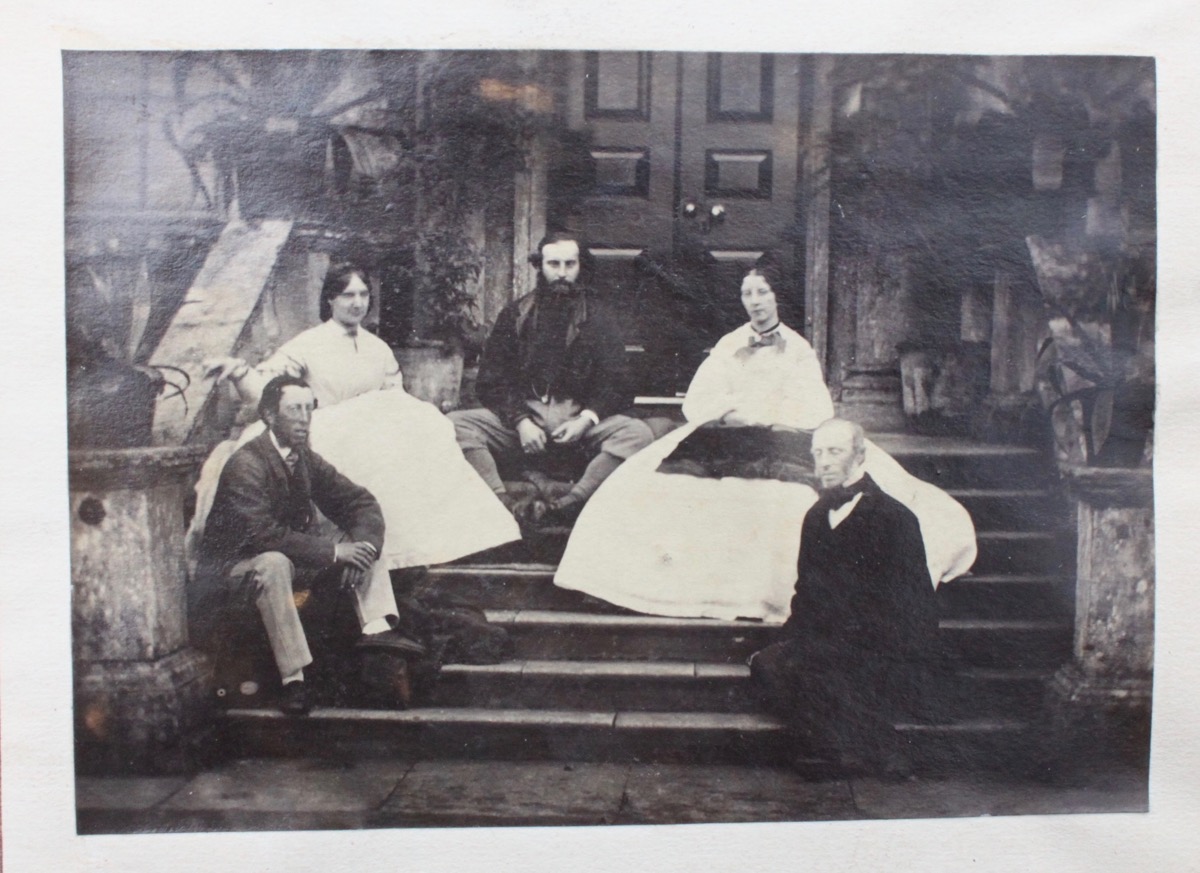 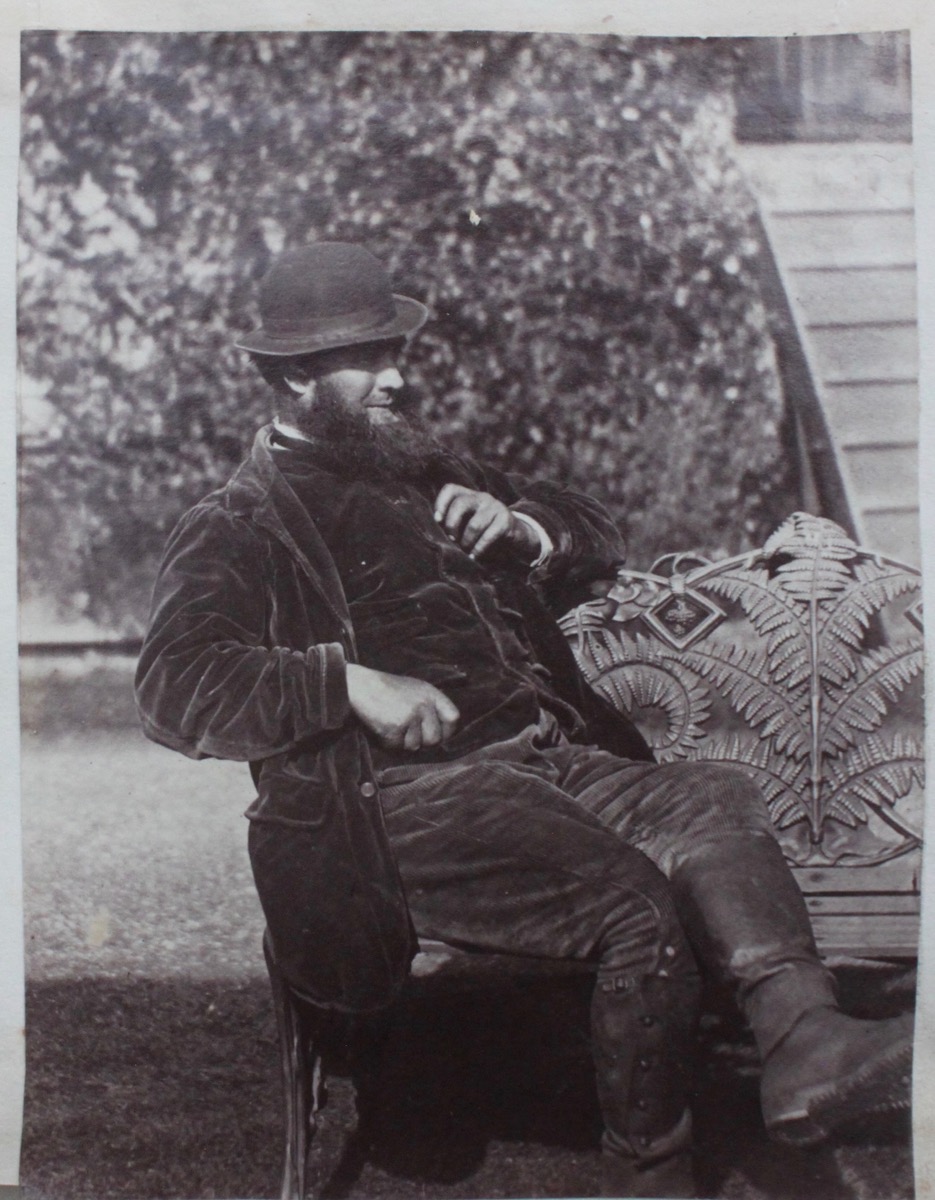 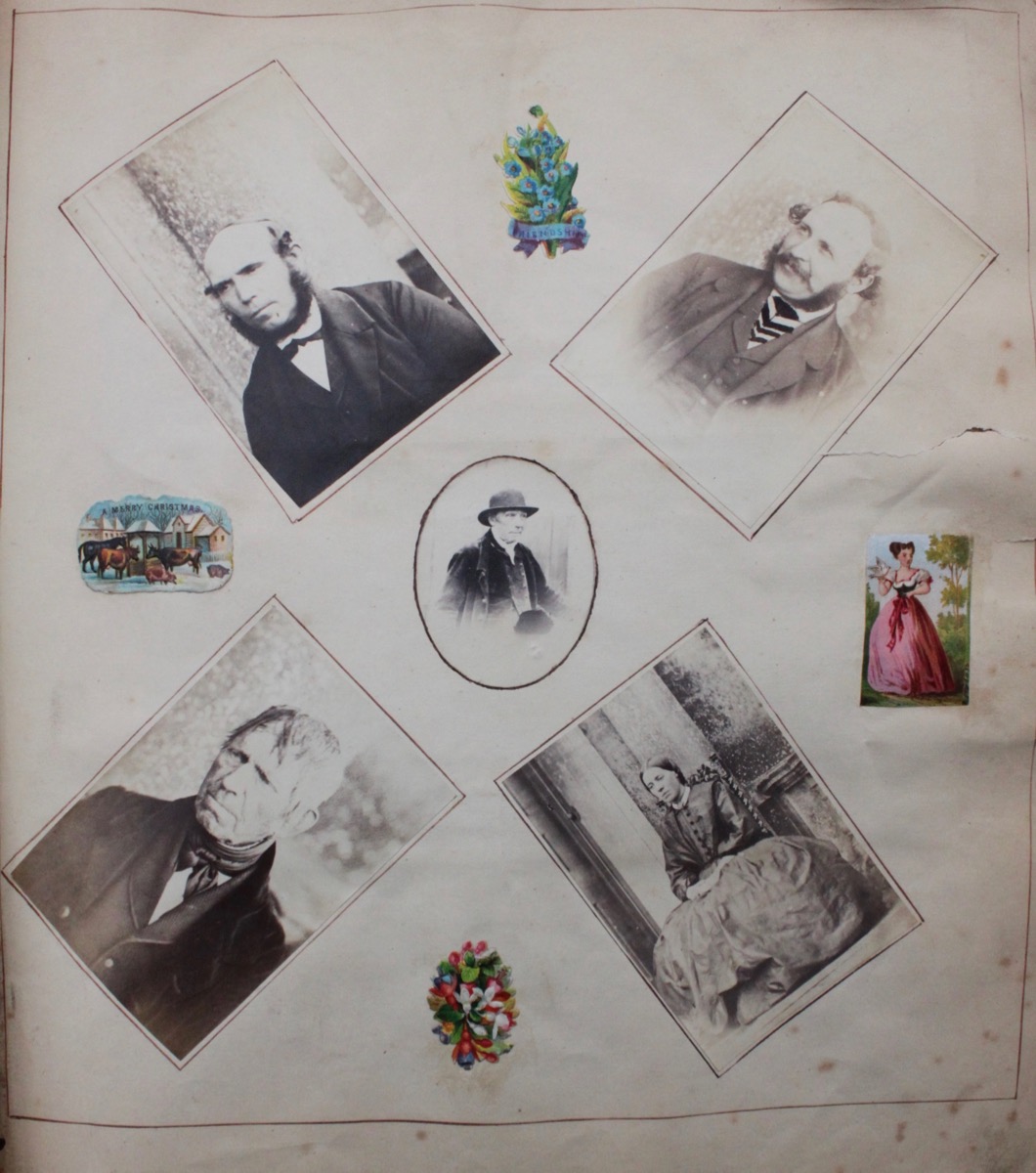 An Album of Early Photographs.

Dupe (William Henry, 1824-1901, butler at Thenford, Northamptonshire). A photograph album of approximately 260 photographs, c.1850s-1860s and some later, including approximately 200 albumen prints by or attributed to W.H. Dupe, including three unusual large albumen print photogenic drawings of ferns on separate sheets (27.5 x 24 cm, 25 x 21 cm and 23 x 22cm), the sheets larger than the album and loosely inserted with 16 similar loose smaller albumen print photogenic drawings of ferns (9 x 6 cm and smaller including two cut-outs), all c.1860s, the remaining album contents including many of places and people (gentry and household members of older age) in Thenford and Wallop, Northamptonshire, and Evercreech, Somerset, and surrounding areas, ink or pencil captions include 'Evercreech Sunday School in Olden Times 1825', 'All the Old People of Thenford', 'Ann Butler Aged 79', 'Happy Moments', and 'The Clown', plus a number of commercial European views including Venice and Pompeii, plus several pencil and pen sketches by the photographer of churches, studies of artefacts within churches, a tree, and an Ancient Greek soldier with a winged horse, various manuscript and printed items, some relating to Mr & Mrs Severne, owners of the Thenford estate, the photographs and other items largely mounted as multiples to rectos and versos of a total of 116 leaves, many leaves detached and some with excisions from earlier removals, ownership signature of W.H. Dupe to front pastedown, inner hinges broken, contemporary skiver, rubbed and slightly soiled, 4to (33 x 28 cm) An extraordinary archive of early photographs taken by a domestic servant and amateur photographer. The little-known William Henry Dupe (1824-1901) was born in Evercreech, Somerset. He married Eleanor Bowen in Fulham, London, in 1856, and their two children were born in Thenford, South Northamptonshire in 1857 and 1860. It would have been highly unusual for an uneducated person without good financial means to have taken up photography in the 1850s. But somehow Dupe did come by a camera and sufficient technical expertise to take, develop and print photographs while working as a servant from the mid-1850s onwards. During the 1860s he worked as a butler for the Severne family at Thenford, and while doing so took photographs of the village and surroundings and their inhabitants, paying as much attention to recording images of his fellow workers and the elderly as the gentry. It appears that he left service at Thenford to become a full-time photographer, even winning prizes in Switzerland and, according to one cutting in the album, New South Wales. He died in Brackley, Northamptonshire, in 1901, just five months after his wife passed away. The album is assembled as a utilitarian scrap album with his own unacknowledged photographs mixed in with commercial photos, standard studio portraits, various sketches, manuscript items and news cuttings. Most of the photographs by and attributed to Dupe, including the three large and beautiful ‘photogenic drawings’ of ferns, would appear to date from the 1860s, though photographs of Evercreech in Somerset suggest that he already had the camera and was taking photographs in the mid-1850s, so before he arrived at Thenford. Dupe is mentioned, and some of his photographs reproduced, in Michael and Anne Heseltine, Thenford: The Creation of an English Garden, Head of Zeus, 2016.

Title: An Album of Early Photographs.

An Album of Early Photographs.