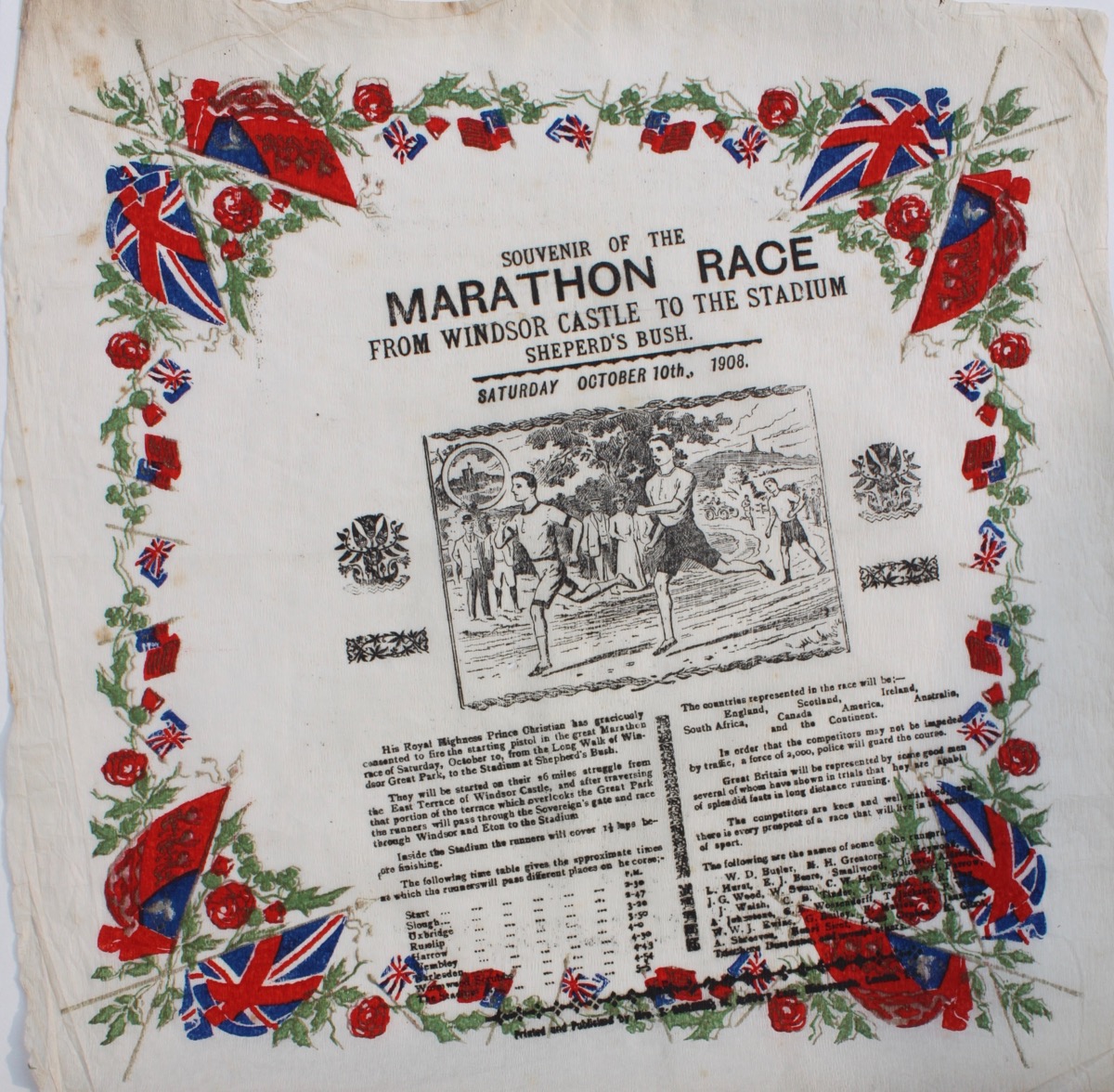 Single sheet 370 x 370 mm, wood block printing on crepe paper, borders in three colours. A little creased and very slightly browned along the edges, Very Good. Seemingly the first marathon which was run at the now standard 26 miles 385 yards “established at the 1908 London Games at least in part as an accommodation to the British royal family, not as an adherence to historical imperative...It was about 26 miles from Windsor Castle to the Olympic Stadium in West London at Shepherd’s Bush. The original plan had the runners coming into the stadium at the royal entrance and running about 585 yards, circling the track counterclockwise and finishing in front of the royal box...But the royal entrance was deemed unsuitable; instead the runners entered at the opposite end of the stadium and, to enhance the view of the Queen and others, ran clockwise for 385 yards to the royal box...The final yards made for a gripping and contentious result. Entering the stadium first on that hot and humid July day was an Italian pastry chef named Dorando Pietri. But he was exhausted, delirious. He turned the wrong way on the track, reversed course and began stumbling. According to news accounts, Pietri fell five times in that final quarter mile...By assiting Pietri to his feet, race officials knew they were jeopardizing his gold medal...Pietri reached the tape first, collapsed and was placed on a stretcher. Arriving second was John Hayes of the United States, which had become incensed by a controversial finish in the 400 meters and the absence of the stars and stripes from the roof of the Olympic stadium during the openeing ceremony. The Americans protested the aid given to Pietri, and Hayes was declared the winner. Though he was disqualified, Pietri became a hero. Queen Alexandra presented him with a gold cup. He spurred an internation marathon craze. Irving Berlin wrote a song about him. And finally in 1921, the official marathon distance became 26 miles 385 yards, the evolution of which is largely lost on today’s top runners.” (Longman. The Marathon’s Random Route to its Length. New York Times, April 20, 2012.) This is likely a souvenir of the second marathon at this length using the same course as the first.