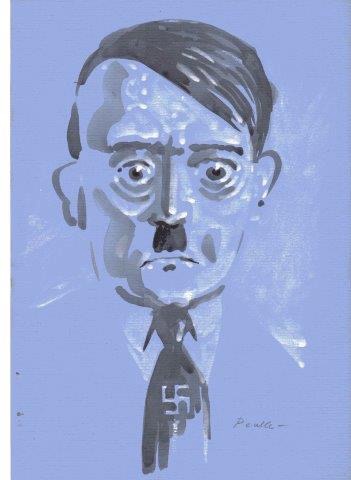 Ink wash, white water colour on blue paper. 11 x 8 inches, mounted, framed and glazed. From Peake's imaginary portfolio by the artist Hitler. When his application to join the War Artists’ Advisory Commission was shelved “...he imagined a propaganda leaflet in the form of a portfolio of pictures by the artist Hitler. The titles were conventional, such as ‘Mother and Child’ or ‘Landscape with Figures’, but they depicted a woman mourning her murdered infant, or peasants being shot. Although the Ministry of Information was initially excited by the series, and proposed using the pamphlet in South America, nothing came of it in the end. Most of the twenty-five pictures went into the archives of the Public Record Office...” [Mervyn Peake; the Man and His Art, edited by G. Peter Winnington. 2006. p. 65] It is obviously a preparatory drawing, showing Hitler as a little perplexed, or slightly mad, rather than the swivel-eyed loon depicted in the final finished image. A rare and unusual example from Peake's war work: he later worked for the propaganda department of the Ministry of Information which led to his series of drawings and paintings of Glassblowers at Chance Brothers of Smethwick. As far as is known this is one of only two drawings from this series of drawings to remain in private hands.