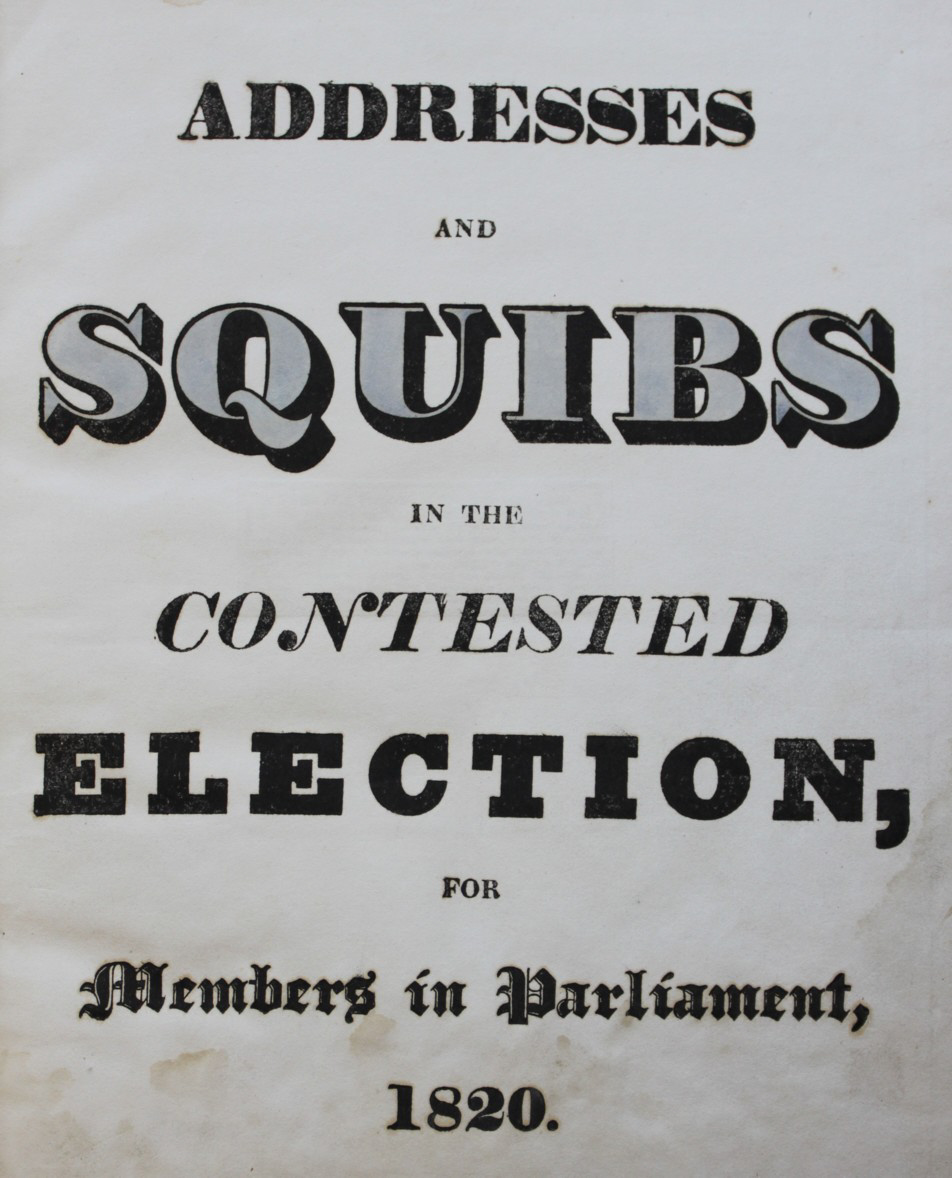 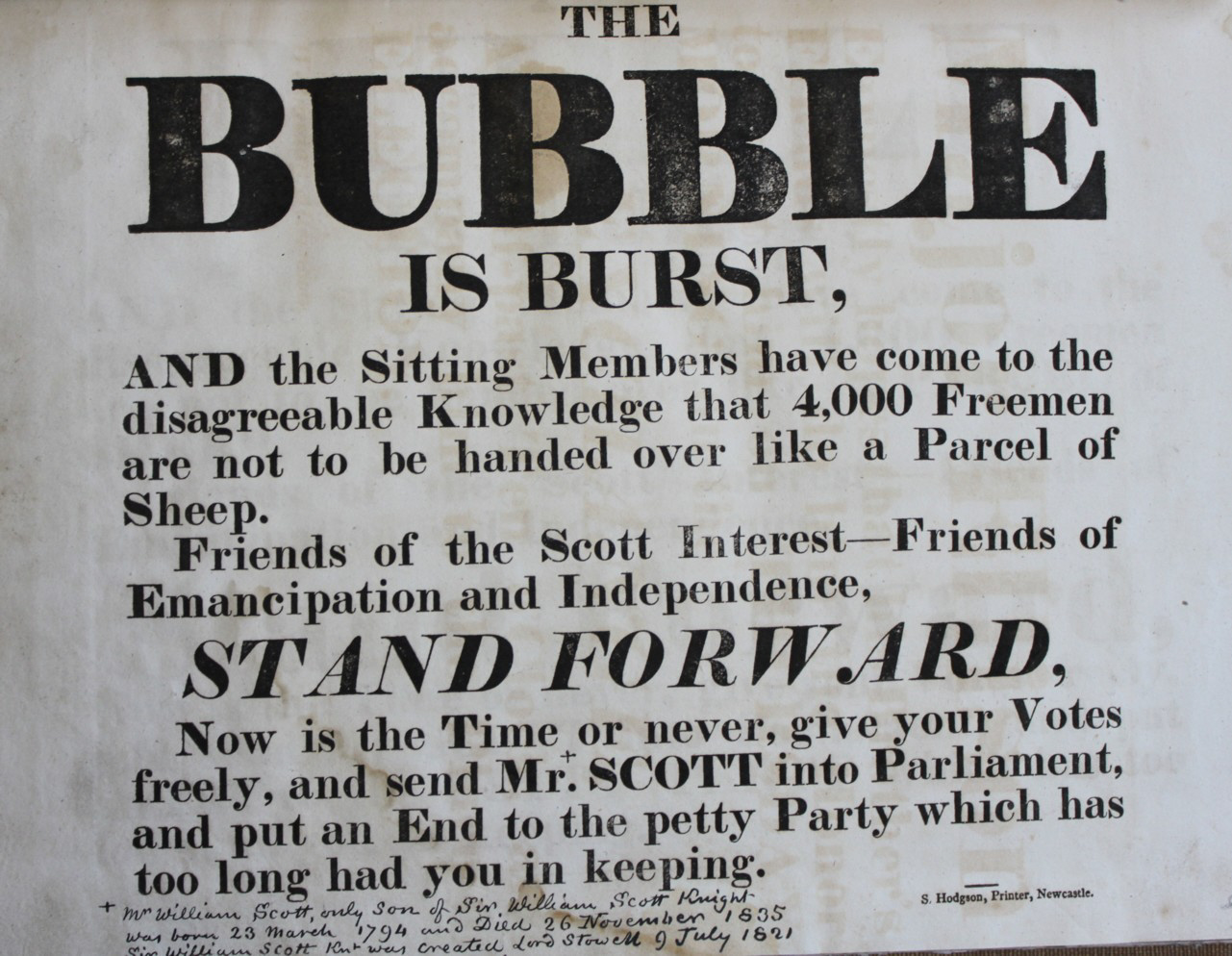 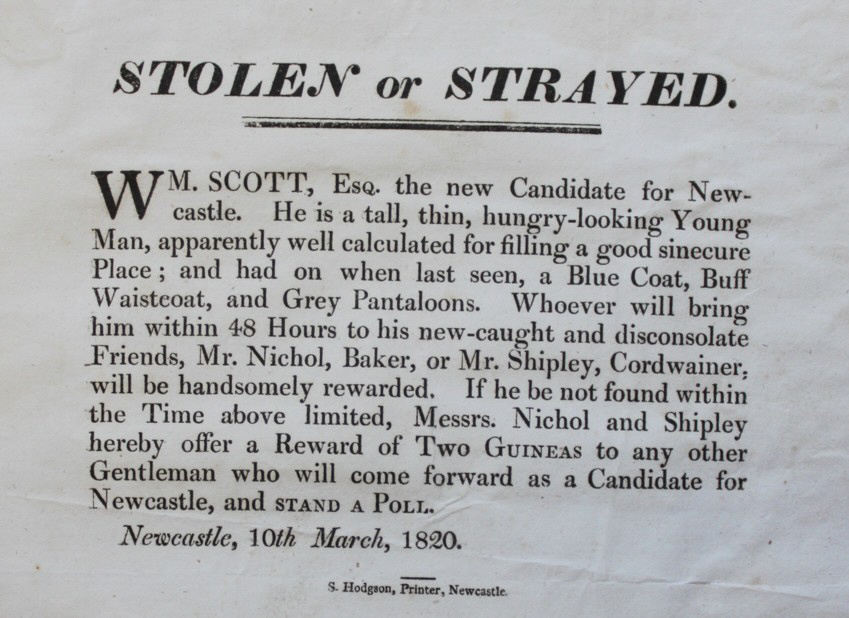 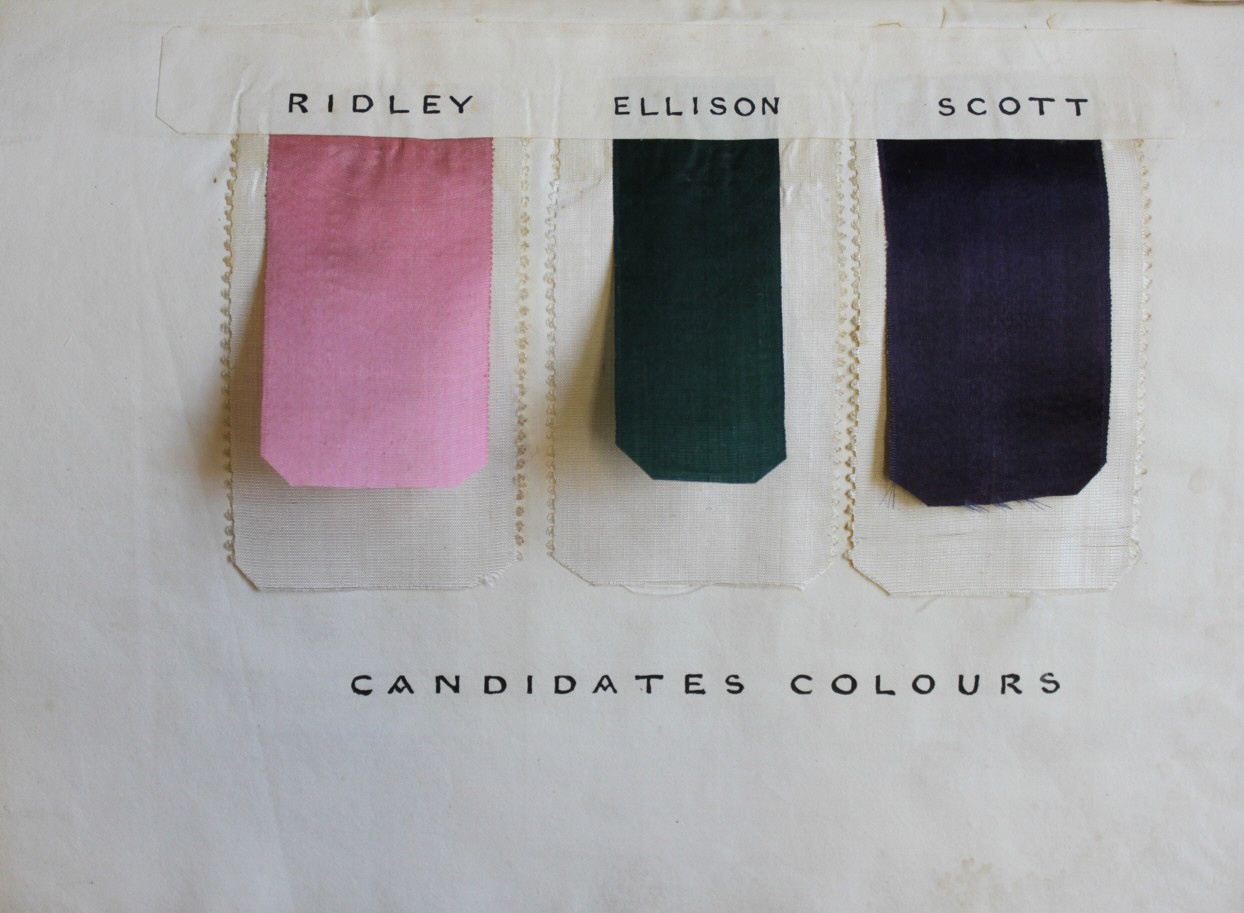 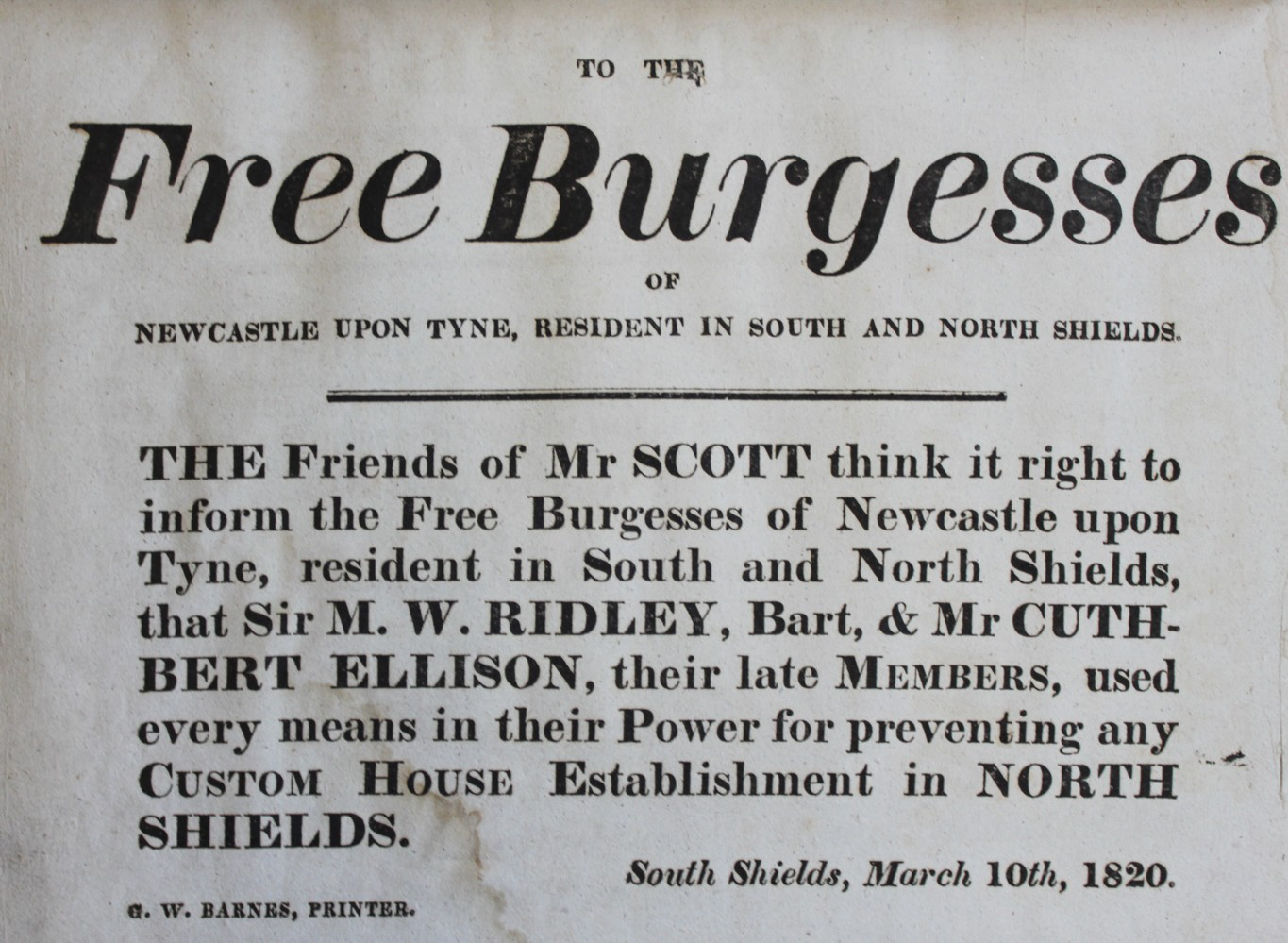 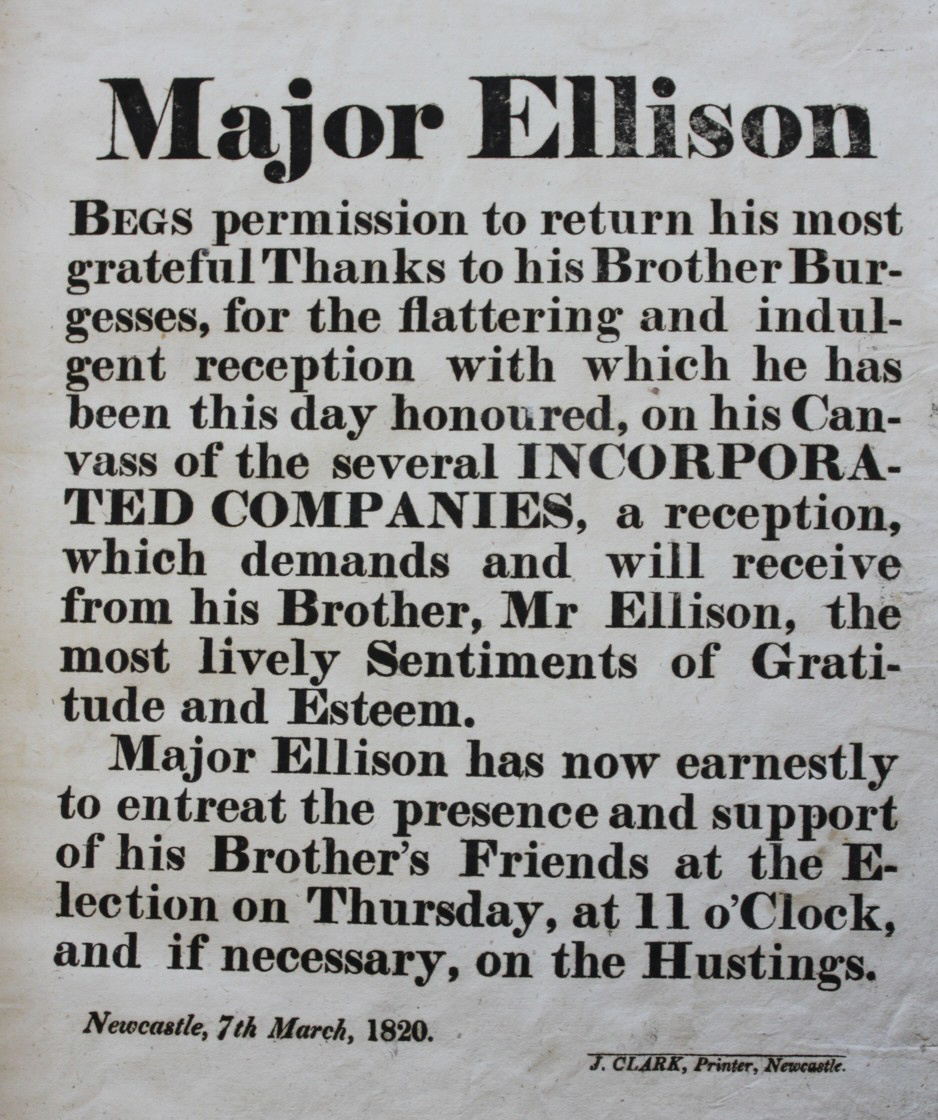 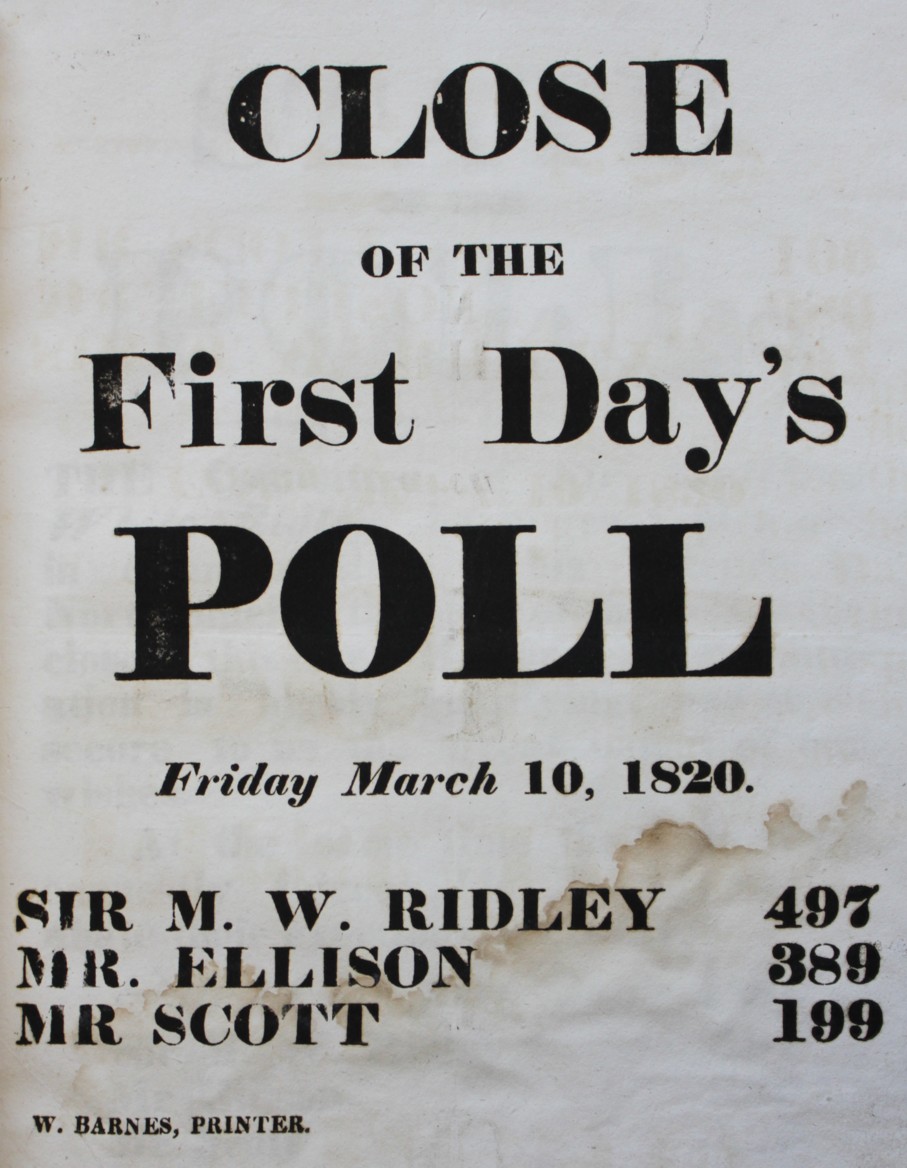 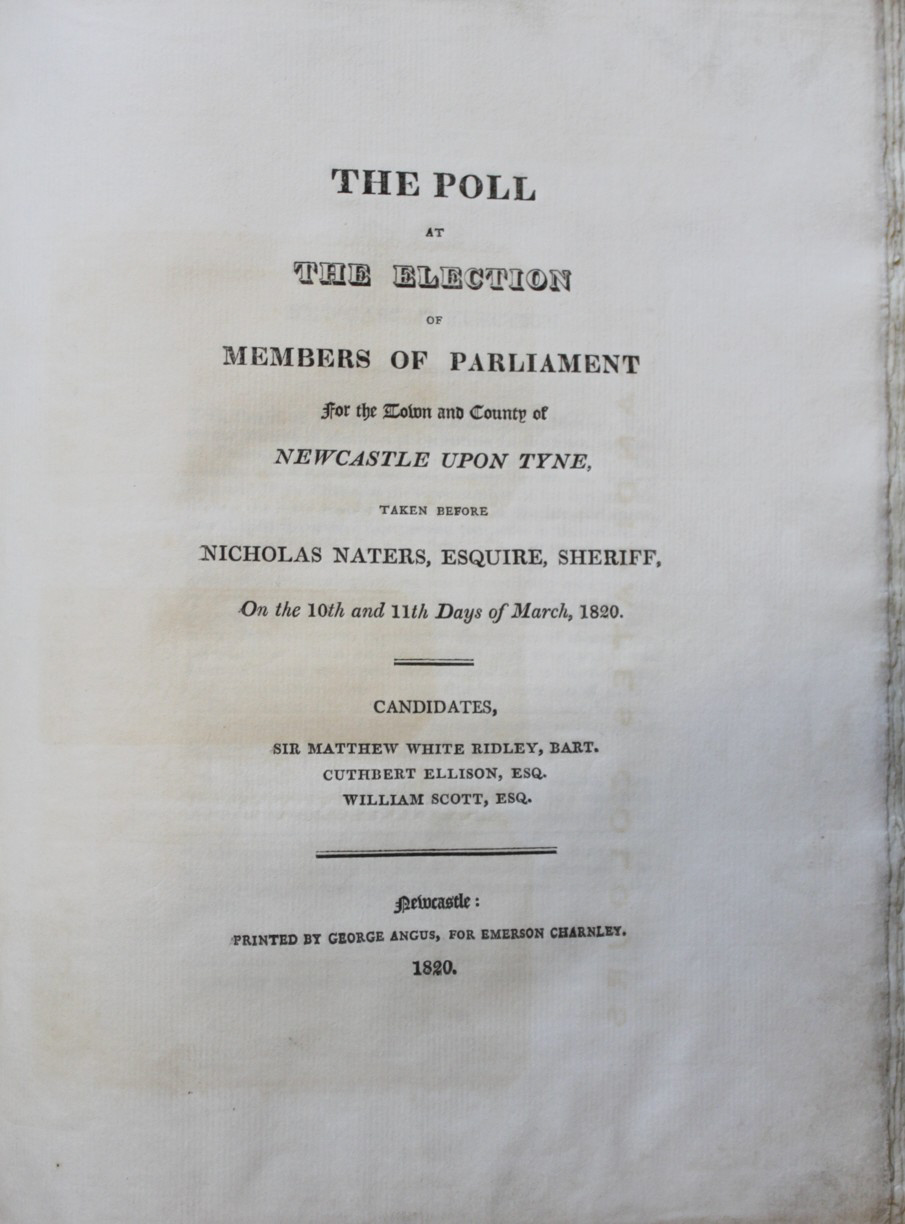 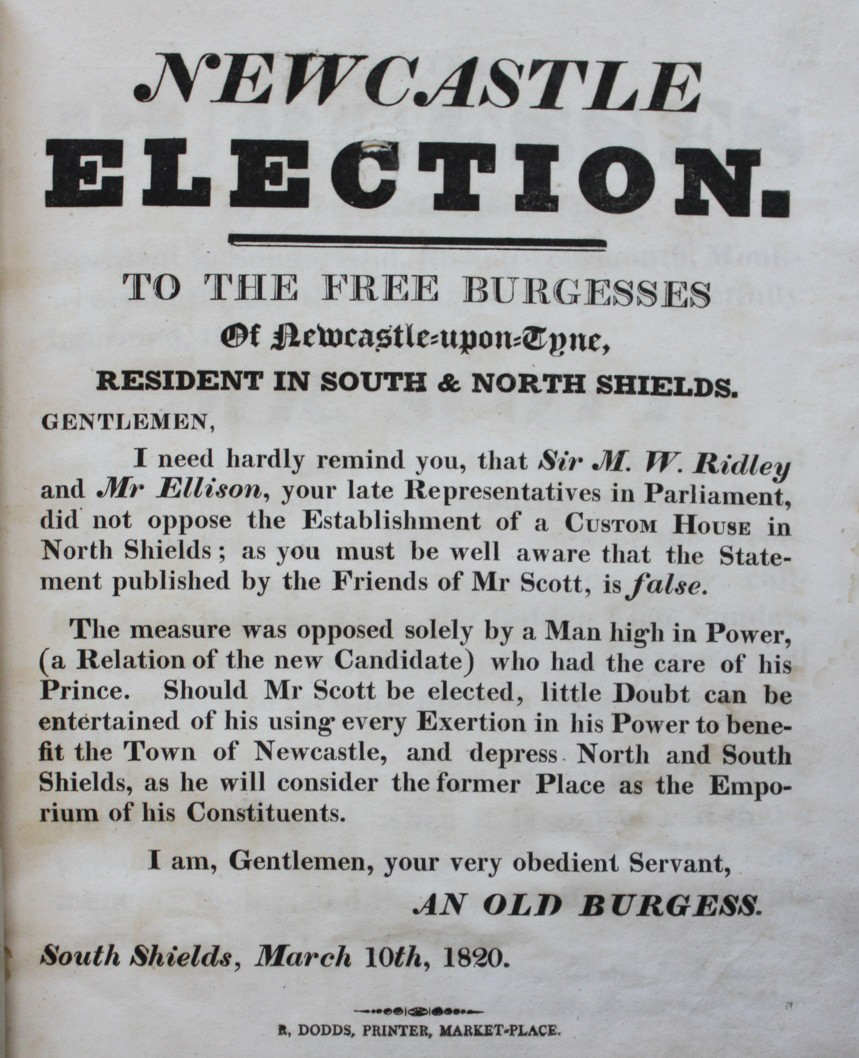 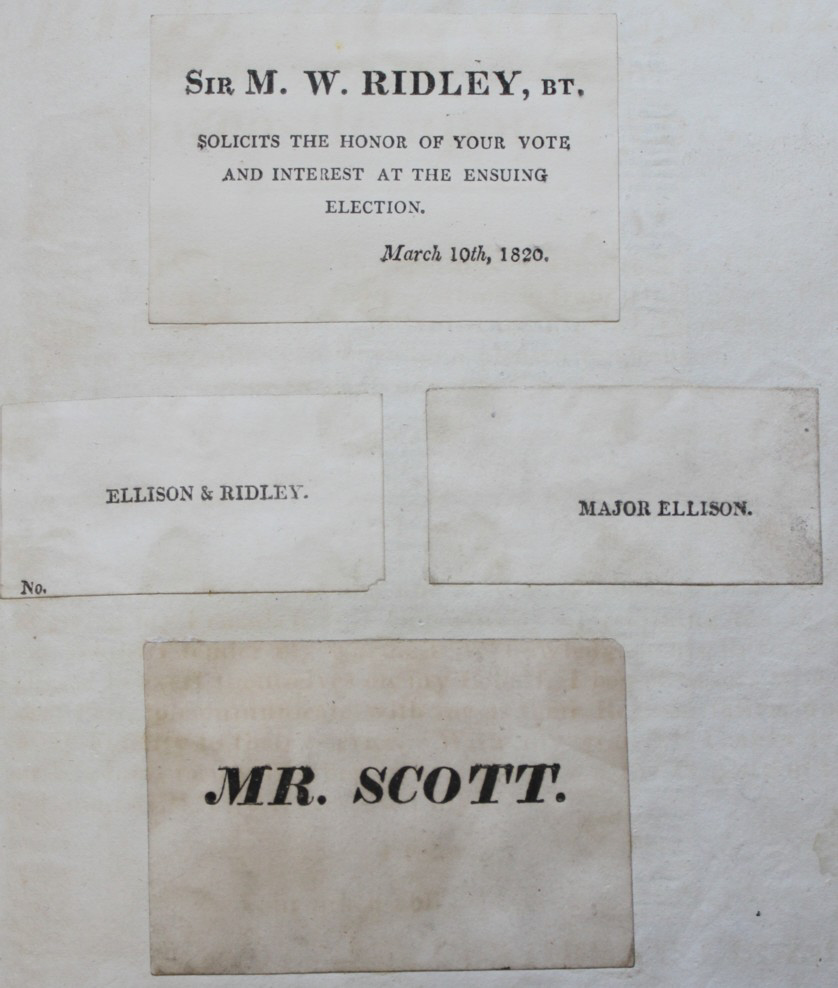 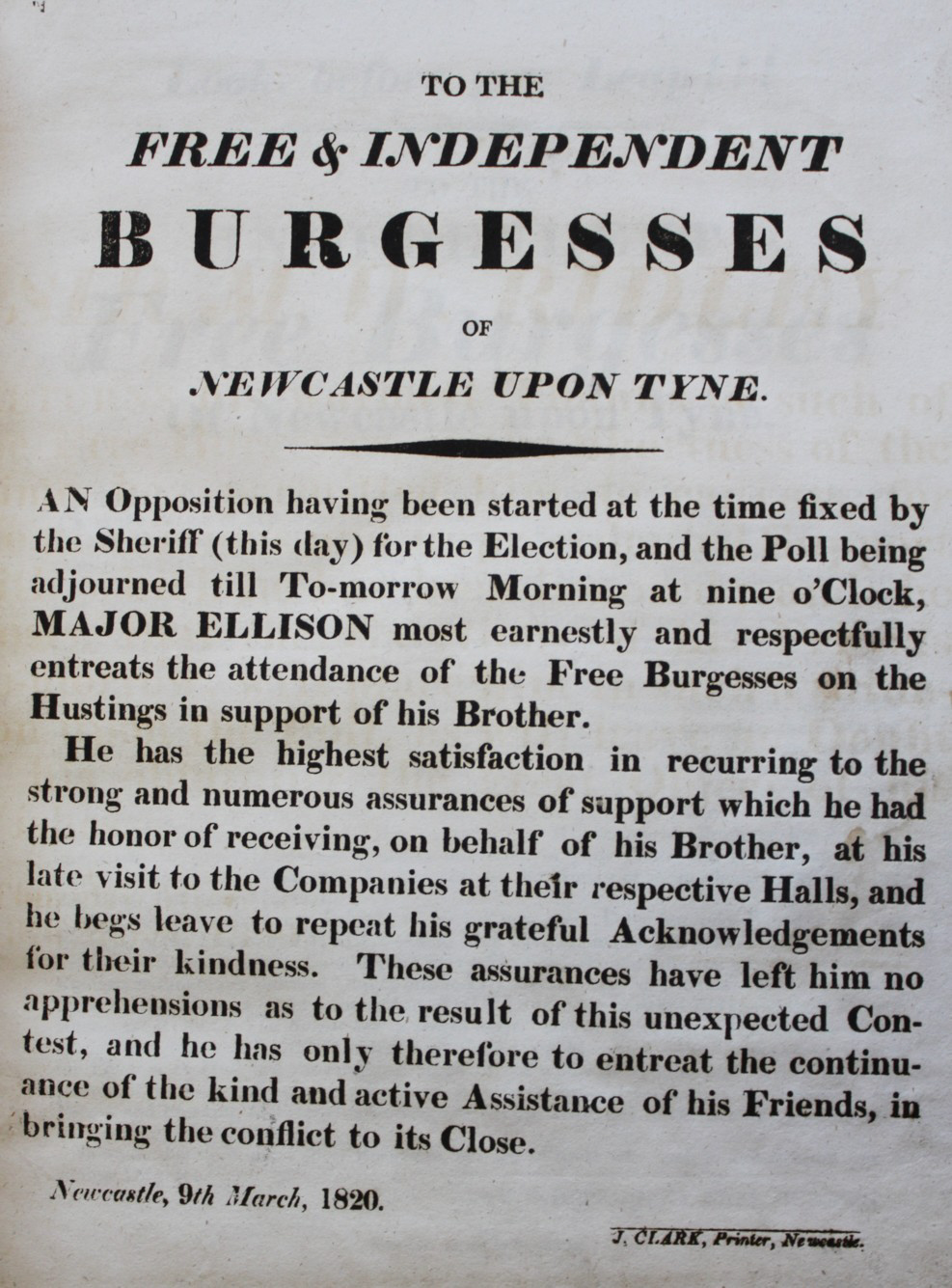 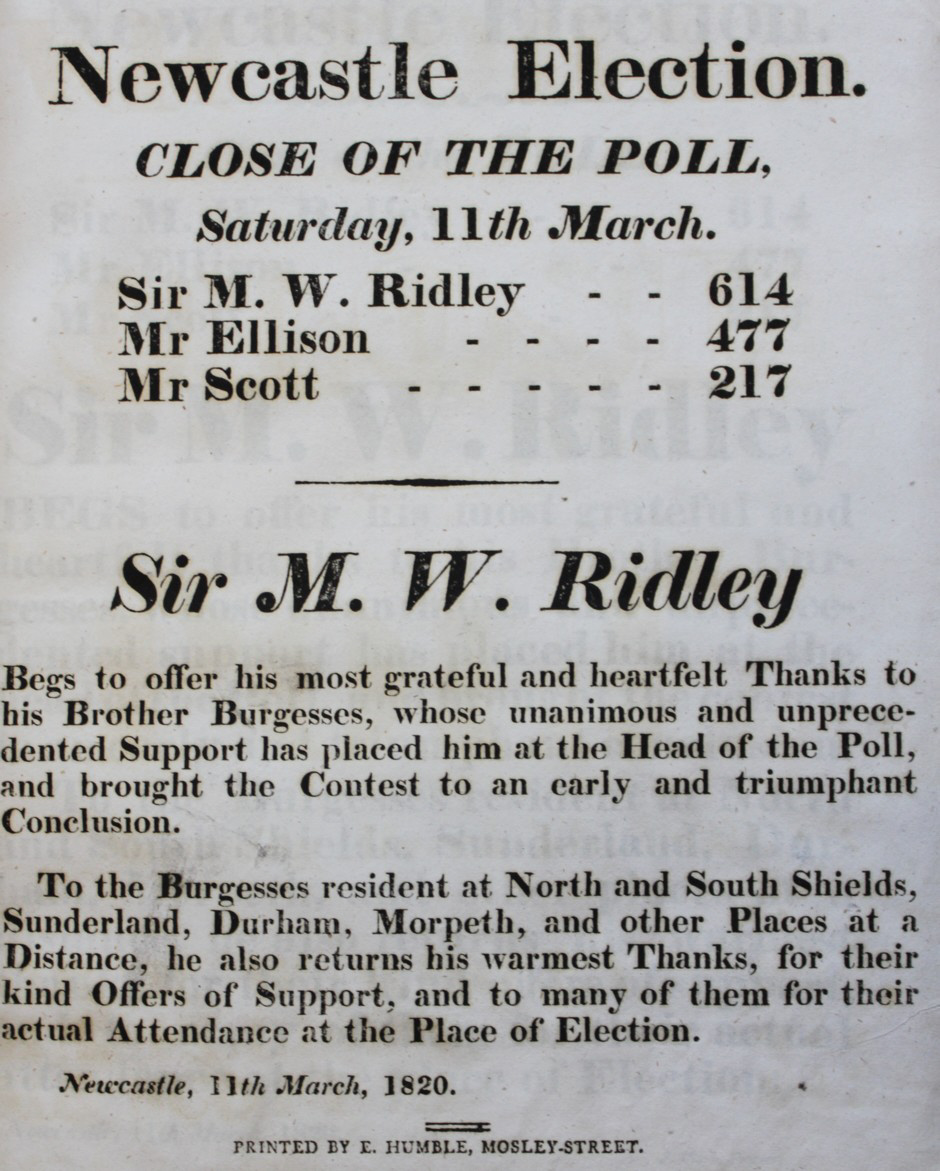 Addresses and Squibs in the Contested Election for Members in Parliament, 1820.

By: NEWCASTLE UPON TYNE

4to. A unique and invaluable collection of what is possibly a complete collection of addresses and squibs for the election of 1820 comprising 80 separate printed pieces, mostly 4to or smaller, Plus the printed poll "The Poll at the Election of Members of Parliament for the Town and County of Newcastle Upon Tyne, Taken Before Nicholas Naters, Esquire, Sheriff, on the 10th and 11th Days of March, 1820. Candidates Sir Matthew Ridley, Cuthbert Ellison, William Scott." Newcastle: Printed by George Angus, for Emerson Charnley, 1820. This would appear to be a collection put together during the mid-nineteenth century with a specially made title page set in a variety of attractive types; there is some trivial damp staining towards the lower part of a few sheets and at some time in the last 50 year it has been rebound in buckram. The first address is dated 3rd March and the last April 8th 1820; they record a typically robust and knockabout election with subtle and not-so-subtle claims and libels flying to and fro. Ridley and Ellison were elected, Ellison's part in the election being taken by his brother as he was abroad owing to health reasons during the hustings and election itself. There are also a few small newspaper clippings included, plus the cards and colours of each of the candidates. The compiler has made a few biographical notes here and there and has identified the anonymous characters in one of the printed poems. Whilst it is not uncommon to find individual addresses and squibs, I have handled many over the last thirty years, it is rare to see the output of a single election in such completeness and detail. The 36 page printed poll would appear to be a Large Paper copy [10½ x 8 inches] and printed on one side only.

Title: Addresses and Squibs in the Contested Election for Members in Parliament, 1820.

Addresses and Squibs in the Contested Election for Members in Parliament, 1820.